At the general election on November 2, 2010, Marylanders were asked to vote on many propositions in addition to the high-profile elections for Governor, General Assembly, and Congress.  One of those other propositions was whether to convene a state constitutional convention (con-con), a proposition Maryland’s Constitution mandates be placed on the ballot every twenty years.

During the past year, I have read through many thousands of pages of archival documents and legal cases relevant to their interpretation of Maryland’s Constitution.  What I have determined is that theirs is a self-serving and incorrect reading of Maryland’s Constitution, albeit one that other incumbents in their position have also supported when it was politically convenient to do so.

What’s To Be Done

The Governor and General Assembly should keep their oath of office to uphold Maryland’s Constitution.   If they won’t, they should be sued to force them to do so.

Regardless of the outcome of any lawsuit, they should be reminded daily that a majority of Maryland voters, the supposedly sovereign We The People, supported convening a con-con.  Out of respect for this expressed will of the people of Maryland, they have a democratic responsibility to convene the con-con, which is wholly within their power to do with a simple majority vote of the General Assembly.   Regardless of any claims they might make that they are not legally obligated to convene the con-con, they have a moral obligation to the people of Maryland to do so.

To be sure, state legislatures and their special interest allies are strongly opposed to con-cons because they are a populist institution liable to pursue democratic values at the expense of incumbent and special interest entrenchment.  That is, they are liable to operate the way their Framers’ intended.

No one is saying con-cons are perfect.  But if you want to create a more modern, competitive, and accountable democracy in Maryland, a con-con is the most efficient and effective democratic instrument to achieve those ends.   Some democratic reforms, including independent redistricting and legislative term limits, cannot, as a practical matter, happen any other way.  And that’s why incumbents, special interests, and their allies fear and oppose con-cons.

Marylanders for a State Constitutional Convention would ideally like the Governor and General Assembly to voluntarily convene the con-con a majority of Marylanders supported.  But if they continue to violate both democratic values and Maryland’s Constitution by not convening the con-con, then we have no choice but to sue them.

Please consider contributing money, legal expertise, or any other resource that you feel could help this campaign.

Thank you for any help you can provide.

For a copy of the correspondence relating to the Public Information Act request on the topic of the November 5, 2012 commentary below, click here.  Note that the Maryland State Board of Elections has essentially refused to answer several of my key requests for information

Judge Ronald Silkworth ruled against the plaintiffs in the lawsuit described in the November 2, 2012 entry below.

MarylandReporter.com publishes J.H. Snider’s commentary, Maryland manipulates ‘majority’ vote, critiquing the procedures of the Maryland State Board of Elections used in calculating the majority denominator for the state constitutional convention referendum in the 2010 General Election.

Press release announcing the lawsuit against the State of Maryland regarding the majority denominator used to determine the winner of Maryland’s 2010 ballot referendum on expanding gambling in Maryland.  This press release led to articles reporting the lawsuit in the Baltimore Sun, Washington Examiner, and Maryland Gazette.

Who: Thomas E. Dernoga on behalf of several Maryland plaintiffs

“This is an issue of plain language,” said Tom Dernoga, who also served two terms on Prince George’s County Council. “Because the threshold included in Senate Bill 1 is in direct conflict with the plain language of Maryland’s Constitution, there is some confusion and my clients are seeking to clarify the standard required to certify an election result November 6th.”

“Lawmakers intentionally made the standard for any gambling expansion very high in the 2007 law,” said former state delegate Gerron Levi, who has also been leading Stop Slots Prince George’s, a coalition of over 70 organizations in Prince

George’s County in opposition to slots, “Maryland voters adopted that standard with their vote on the ballot question in 2008.”

The print edition of the Baltimore Sun publishes J.H. Snider’s commentary, On gambling vote, what is meant by a ‘majority’? Legislature applies different interpretations according to its self-interest.  The commentary argues that Maryland’s General Assembly, depending on its political self interest, has inconsistently interpreted majority clauses in Maryland’s Constitution, including the majority to convene a constitutional convention.

The Washington Post editorializes in favor of a yes vote on the Nov. 6, 2012 referendum seeking to repeal the General Assembly’s redistricting plan.  Although it draws no connection between redistricting reform and a state constitutional convention,  it does feature at the top of its “more on this issue” section a Washington Post op-ed making that connection.  See Maryland should reconsider its redistricting.

The Washington Post editorializes against Maryland’s redistricting system and the difficulty of getting the Governor and General Assembly to redistrict consistent with democratic values.  See Righting the tilted system of a gerrymandered map in Maryland.  In response, J.H. Snider comments:

A commentary, Maryland’s General Assembly is Not Above the Law, by MarylandConCon.org’s legal advisor, Robert Martineau,  is published in the Severna Park Patch, Historic Annapolis Patch,  Greater Annapolis Patch, and other Patches in Maryland.

The print edition of the Washington Examiner publishes J.H. Snider’s commentary, How to fix Maryland’s D-minus in corruption, arguing that convening a state constitutional convention is the most politically realistic way of addressing a certain class of democratic reform issues where incumbent legislators have a blatant conflict of interest in proposing and implementing reform.

The State Integrity Investigation publishes the results of its year-long investigation of U.S. state integrity policies and practices.  Maryland is ranked a D-.  Many of the areas where it receives a low grade (e.g., Public Access to Information, F; Legislative Accountability, F; Lobbying Disclosure, D-; Redistricting, D-, and Ethics Enforcement Agencies, D) cover incumbent information and elections, would be central to the democratic accountability agenda of a Maryland state constitutional convention. 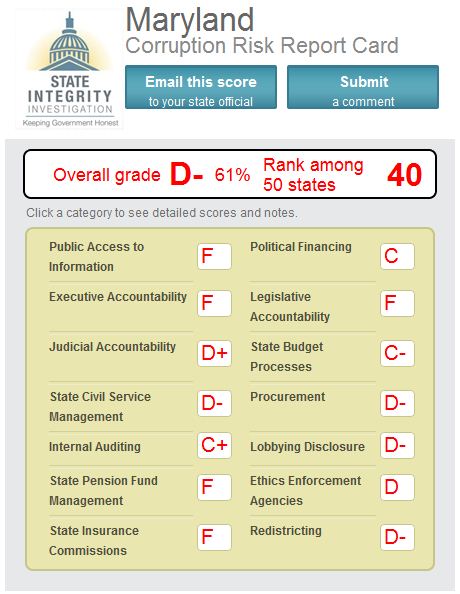 The print edition of the Washington Examiner publishes J.H. Snider’s commentary, Here’s why Maryland politicos must convene a constitutional convention, observing that, when the issue involves a “political question,” Maryland has one standard for upholding the law for average citizens and another for the politically powerful.

J.H. Snider testifies on three bills concerning redistricting in Maryland before the Maryland Senate Committee on Education, Health, and Environmental Affairs.  The testimony closes by linking redistricting reform in Maryland to convening the state constitutional convention a majority of Maryland voters supported at the ballot referendum on Nov. 2, 2010.  The Maryland General Assembly must approve a legislative redistricting plan by Feb. 25, 2012.

Letter to the editor on the editorial page (p. A18) of today’s print edition of the Washington Post:

Marylanders for a State Constitutional Convention launches a petition asking the Maryland General Assembly “to uphold Maryland’s Constitution and the People’s Will.”  This replaces the trial petitions launched on February 11, 2012, described below.

The print edition of the Washington Post publishes J.H. Snider’s commentary, It will take a con-con to untangle Maryland’s gerrymanders, describing the Maryland General Assembly’s conflict of interest in solving the gerrymander problem, which is the type of democratic reform problem constitutional conventions were invented to address.

Marylanders for a State Constitutional Convention launches a petition asking the Maryland General Assembly “to uphold Maryland’s Constitution and the people’s right to convene a state constitutional convention.”

The petition may be signed on any one of three different petition websites:

1. Care2 Make a Difference (this is the default, recommended petition website)

The online edition of the Washington Post publishes J.H. Snider’s commentary, It will take a con-con to untangle Maryland’s gerrymanders.

The Baltimore Sun publishes J.H. Snider’s commentary, State ignores voters on constitutional convention; Majority voted in favor of con-con in 2010, yet it hasn’t been convened, arguing that the refusal of Maryland’s Governor and General Assembly to convene the con-con voters supported violates Maryland’s Constitution.